Dollar For Dollar, Save The Frogs Blows The Big Guys Away 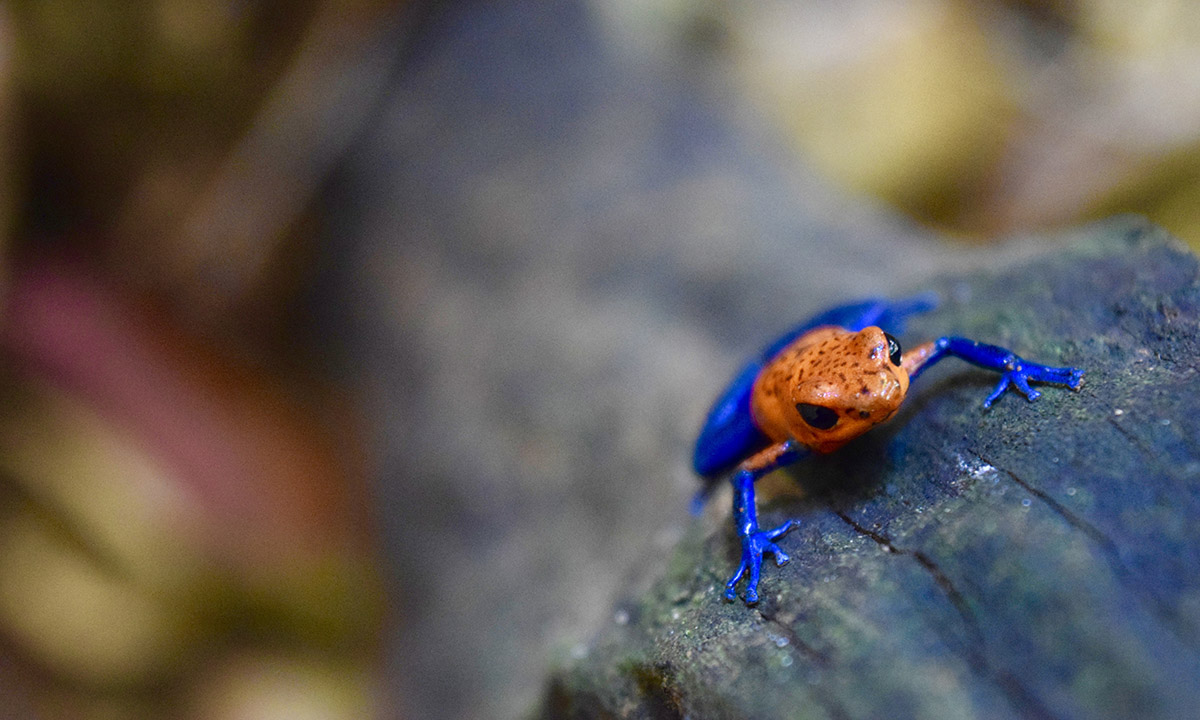 Have you ever been curious about how the charities you support spend your donations? Would you like to ensure your donations get used for the greatest good? If you are like most donors, the answers are YES and YES!

I chose five of the largest and most well-known environmental charities (we will refer to them as The Big Guys) and I compiled their relevant financial data to compare it to that of SAVE THE FROGS!. My goal was to determine how SAVE THE FROGS! is doing in regards to wise use of donor funds. The five charities I chose all have annual revenues in the hundreds of millions of dollars, and all five have average revenues over 1,000 times greater than does SAVE THE FROGS!, so it is safe to assume these charities collect a significant proportion of the world’s environmental donations.

The Big Guys all do fabulous things for the environment; this article is only intended to examine how their supporters’ donations are spent. Read on to find out what I found out! 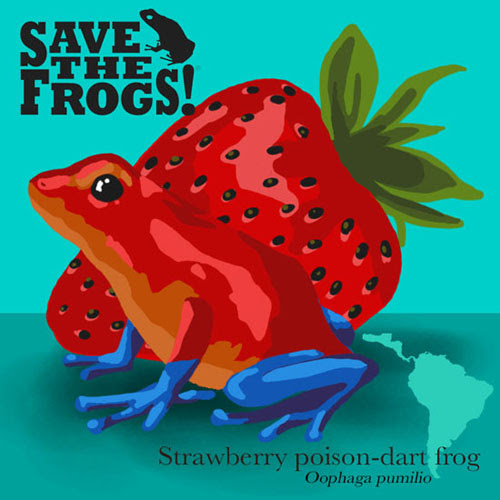 Let’s examine what percent of each charity’s total spending in 2015 went to the programs and services they deliver (as opposed to administration and fundraising):

In 2015, 94.2% of SAVE THE FROGS! spending was on the programs we deliver, meaning dollar for dollar we spend your donations 15% more effectively than do the big guys! How is this possible? Strict financial management, no shiny offices, no excessive salaries, and an active volunteer program are some of the reasons.

Conclusion:
If you were investing in the stock market, would you choose the stock that annually produced a 15% better return on investment for you? Yes, of course! So when you donate to your favorite environmental cause (which is in essence an investment in the future of the planet) we hope you can see the value of donating to a grassroots nonprofit like SAVE THE FROGS!, where you get the most significant return on your environmental investment. 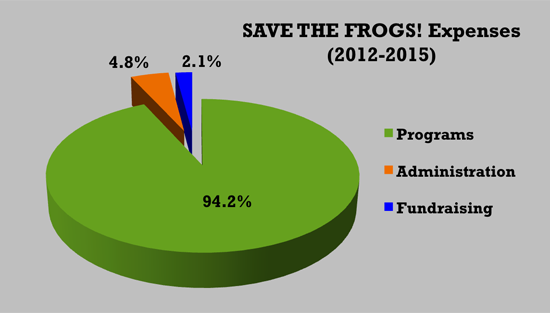 SAVE THE FROGS! ranks well above average, and far beyond “The Big Guys”, when it comes to ensuring your donation dollars actually fund conservation programs. Chart created by STF! Volunteer Stacey Taylor.

To some extent, donations to The Big Guys fund extravagance rather than environmental conservation.

Did you ever wonder how much the CEO’s of large nonprofits get paid? Here’s the data:

Conclusion: The Big Guys spend 17 times as much on CEO salary as does SAVE THE FROGS!. 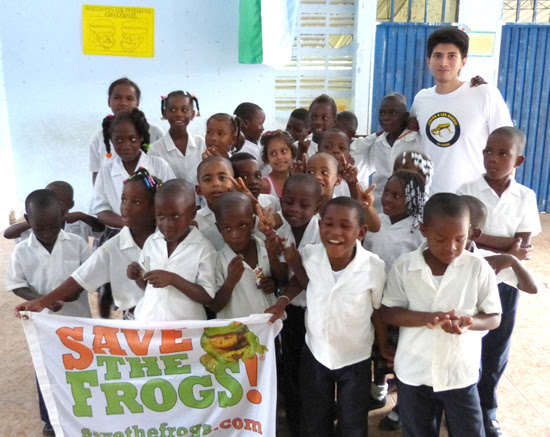 SAVE THE FROGS! Colombia visited schools in 2014 to educate students about the need to protect poison dart frogs from illegal collection and exportation for the pet trade. This program was funded by a grant from SAVE THE FROGS!.

A FEW THOUGHTS ON NONPROFIT SALARIES:
A nonprofit needs to pay its staff enough to attract and keep top talent, or the nonprofit will not achieve its maximum potential. Many large nonprofits use this as a rationale for paying extraordinarily high salaries to their CEO. But would you want your leader to be a person who would leave the organization without second thought in the pursuit of a higher salary elsewhere? Should the CEO be earning far more than is needed to live a very comfortable life, while asking donors for more funds – ostensibly for the cause? How much dedication to the cause is that?

At SAVE THE FROGS!, I am at the other side of the spectrum. I am here based on my dedication and belief in the organization and not because of my salary, which is one-fifth what I could earn if I sought employment elsewhere. However, my salary is low enough that I do often consider pursuing other career options. If I had any health issues, a family to support, or unexpected financial needs, I would need to leave SAVE THE FROGS! or significantly reduce my time here.

SAVE THE FROGS’ current inability to pay higher staff salaries is one of our most significant organizational problems, as low salaries are every bit as unsustainable as are high salaries: in the former case, staff is eventually forced to pursue other employment options, while in the latter case the organization either runs out of funds or turns off donors for improper use of funds. There is a middle ground, somewhere between $28,700 and $486,675 per year, and I do hope we arrive there as soon as possible, which can only occur through increasing our organizational revenues significantly. 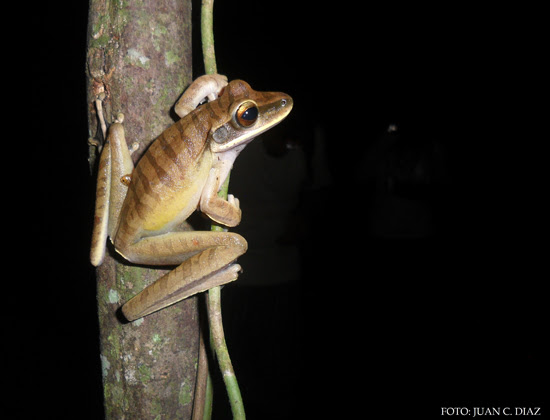 Whereas The Big Guys spend huge amounts of money on fancy office buildings in the most expensive cities in the world, SAVE THE FROGS! employees work from their homes and we maintain no office. SAVE THE FROGS! Ghana (technically a separate entity) does have an office in Kumasi, but pays only $83 per month for the space. Yes $83 per month! 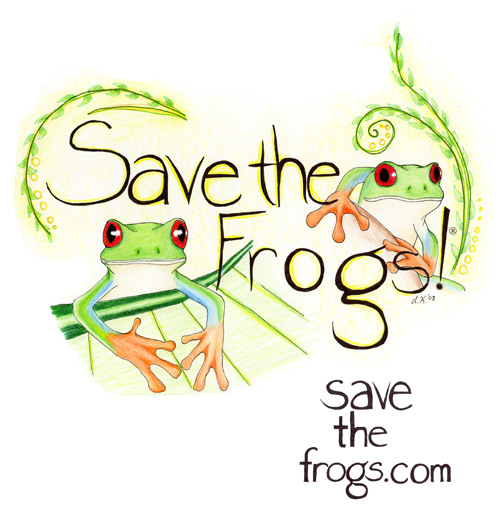 Red-Eyed Treefrog Art by SAVE THE FROGS! Volunteer Artist Leah Klehn, who conceived the SAVE THE FROGS! Art Contest while she was in high school. This is the first piece of frog art we ever received. We have since had art submitted by over 10,000 artists from 60+ countries.

Thank you for your much needed and much appreciated donation, which we will use far more effectively than would The Big Guys!

I described above just a few of the multitude of reasons we believe SAVE THE FROGS! has earned the right to ask you for your financial support. SAVE THE FROGS! will continue to use donors’ contributions as effectively as possible to achieve our mission as quickly as possible.
Thank you again for making all our frog saving efforts possible!

Note that data for WWF, TNC, CI, and NRDC in this article was sourced from the Charity Navigator website. Greenpeace International data came from their 2015 annual report.

We will celebrate the 15th Annual Save The Frogs Day on Friday April 28th, 2023. Yes, on Friday! We encourage you to take part! 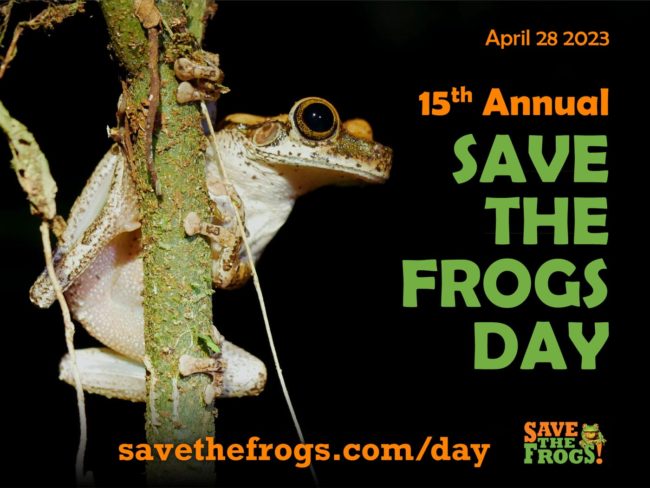