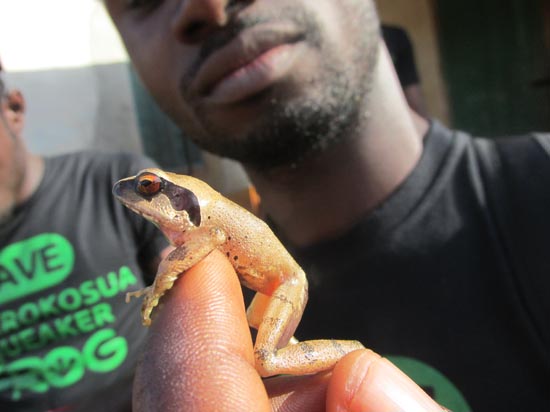 In April 2016, SAVE THE FROGS! Ghana Executive Director Gilbert Adum received international attention and recognition for his work in Ghana with the Giant Squeaker Frog.

Born to a tribe of bush hunters, Gilbert Adum grew up hunting frogs as part of the indigenous tradition. His naivety to the global threat of frogs, particularly in his region, turned to regret as he grew older and more aware of the lack of conservation in his home country. In 2011 SAVE THE FROGS! Executive Director Dr. Kerry Kriger, visited Ghana in an attempt to engage and empower the locals.

Dr. Kriger’s visit to another country has never resulted in a bigger and longer-lasting impact. Despite the “small” goal to just give presentations to schools, SAVE THE FROGS! Ghana has become the most active branch of SAVE THE FROGS!

Since 2011, Gilbert Adum has founded and run West Africa’s first amphibian conservation initiative with incredible success. His biggest accomplishment: saving the Giant Squeaker Frog from the brink of extinction.

The Giant Squeaker Frog was rediscovered by Gilbert in 2009 in the Sui River Reserve. After extensive surveys spanning years, only 14 individuals were found. Through SAVE THE FROGS! Ghana and the team’s habitat restoration and action against illegal mining, huge tracts of land have been reforested and non-native, harmful vegetation removed. Today, the population has doubled and more than 27 Giant Squeaker Frogs can be found in the reserve. 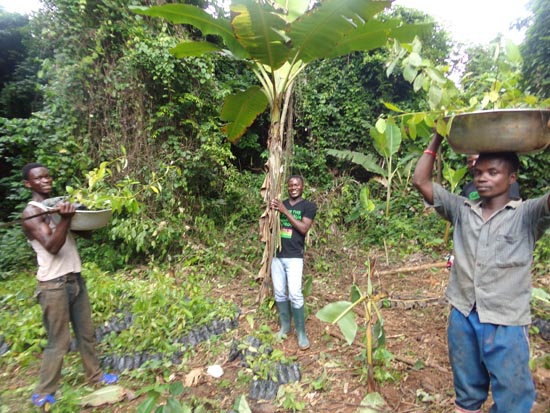 On April 27th, 2016 Gilbert Adum of SAVE THE FROGS! Ghana received the Whitley Award in honor of his exceptional grassroots success in Ghana, where over 90% of the forests have been cleared.

He focuses on the endangered Giant Squeaker Frog to accomplish his larger conservation goals. As he asks in his acceptance speech,
“Who does not love the squeaky sound that squeaker frogs make? I have yet to meet anyone who doesn’t.”

Presented by the patron HRH Princess Anne at the ceremony, his share of £35,000 pounds (~$51,000) will help develop alternative livelihoods for the communities who depend on the Giant Squeaker Frog habitat.

Gilbert’s effective strategy is was best summed up by the attendant Sir David Attenborough, who serves as a trustee of the Whitley Fund for Nature:
“Empowering local people, who understand what the problems are, and who have the local knowledge, determination and vested interest to find the solutions is the very best way to ensure long term protection for the natural world.”

To which Gilbert responded in his acceptance speech:
“Sir, if we can succeed in saving Ghana’s frogs, it would have been on your strong shoulders.”

Gilbert does know what’s best for his country. And it starts with providing access to beekeeping and honey harvesting as an alternative to endangered bush meat. If you want to get involved in this initiative, see below.
So, why frogs? 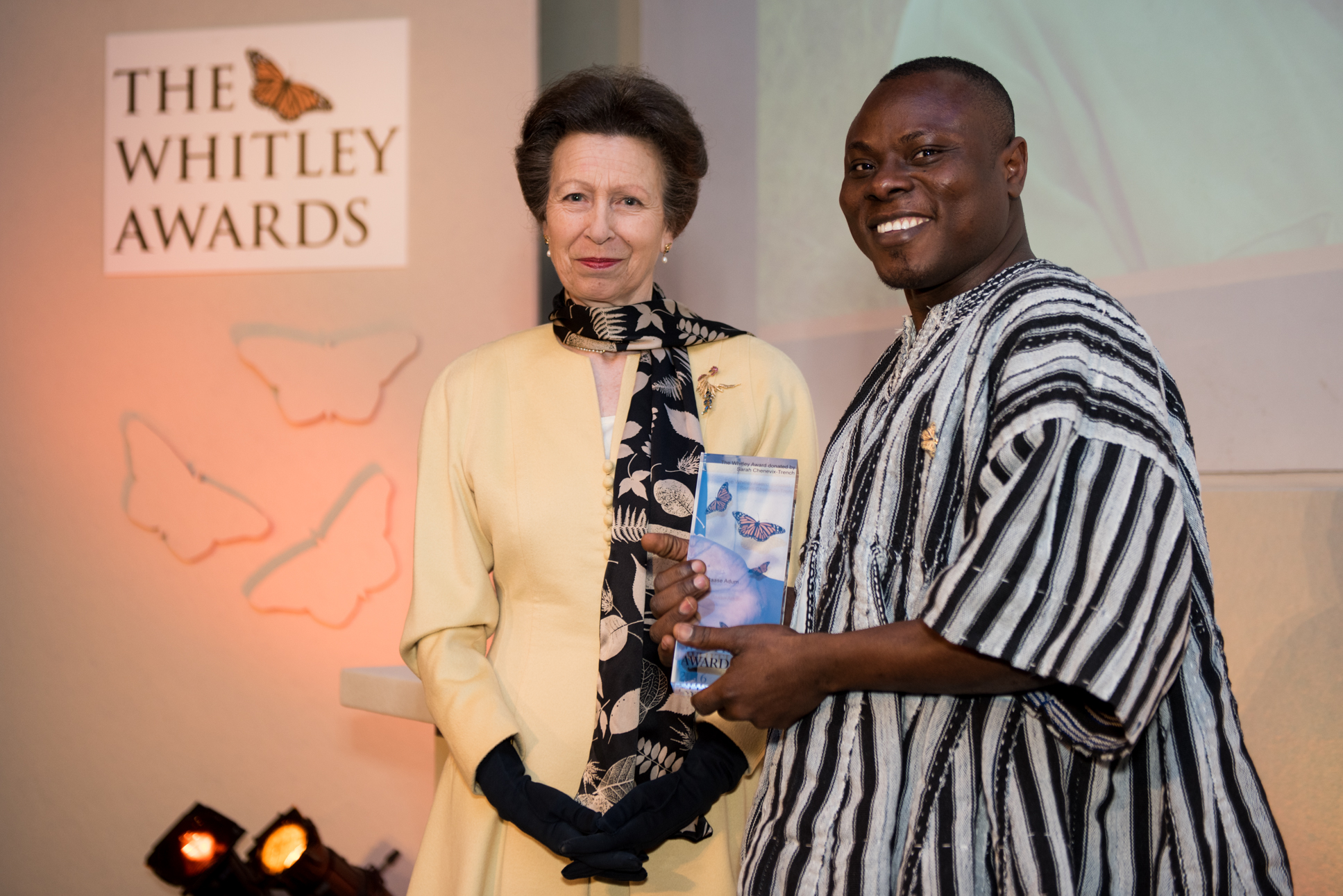 Besides being the most endangered group of animals of the planet, frogs eat disease vectors, including mosquitos.

Despite all the hard work Gilbert and SAVE THE FROGS! Ghana have accomplished, saving the frogs doesn’t have to take a lot of time. Anyone can a little act with a big impact.

“I encourage every one of you to save the frogs and save the world.”