Why Frogs Are Important 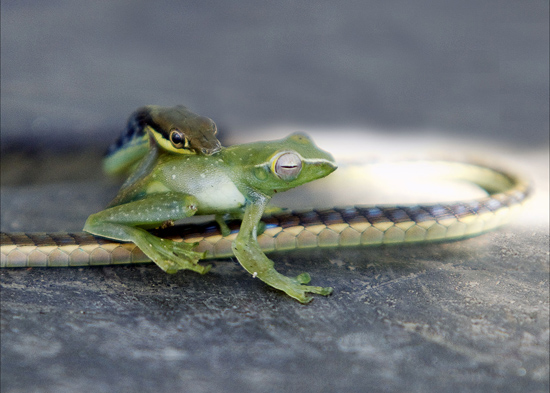 Frog populations have been declining worldwide at unprecedented rates, and nearly one-third of the world’s amphibian species are threatened with extinction. Up to 200 species have completely disappeared since 1980, and this is NOT normal: amphibians naturally go extinct at a rate of only about one species every 500 years!!! Amphibian populations are faced with an array of environmental problems, including pollution, infectious diseases, habitat loss, invasive species, climate change, and over-harvesting for the pet and food trades. Unless we act quickly, amphibian species will continue to disappear, resulting in irreversible consequences to the planet’s ecosystems and to humans. Frogs eat mosquitoes; provide us with medical advances; serve as food for birds, fish and monkeys; and their tadpoles filter our drinking water. Plus frogs look and sound cool, and kids love them — so there are lots of reasons to save the frogs!

“When we save the frogs, we’re protecting all our wildlife, all our ecosystems and all humans.”
— Dr. Kerry Kriger, Founder & Executive Director of SAVE THE FROGS!, Washington DC, Save The Frogs Day, April 29 2011 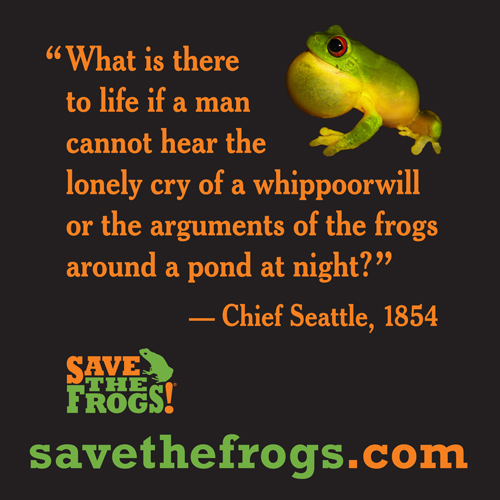 “And what is there to life if a man cannot hear the lonely cry of a whippoorwill or the arguments of the frogs around a pond at night?”
— Chief Seattle, 1854

Frogs are an integral part of the food web

Tadpoles keep waterways clean by feeding on algae. Adult frogs eat large quantities of insects, including disease vectors that can transmit fatal illnesses to humans (i.e. mosquitoes/malaria). Frogs also serve as an important food source to a diverse array of predators, including dragonflies, fish, snakes, birds, beetles, centipedes and even monkeys. Thus, the disappearance of frog populations disturbs an intricate food web, and results in negative impacts that cascade through the ecosystem.

“Insect masses like fireworks explode.
Dengue, Malaria, West Nile Virus:
Discomfort, despair will fill your abode.
This is what your life will be without us.”
—Frog Poetry by Michael Dutton

Most frogs require suitable habitat in both the terrestrial and aquatic environments, and have permeable skin that can easily absorb toxic chemicals. These traits make frogs especially susceptible to environmental disturbances, and thus frogs are considered accurate indicators of environmental stress: the health of frogs is thought to be indicative of the health of the biosphere as a whole. Frogs have survived in more or less their current form for 250 million years, having survived countless ice ages, asteroid crashes, and other environmental disturbances, yet now one-third of amphibian species are on the verge of extinction. This should serve as an alarm call to humans that something is drastically wrong in the environment.

An ecological indicator they are
The most accurate so far
Pollution, destruction and disease
We need to hear their pleas
— Frog Poetry by Shruti Sengupta, 25, India 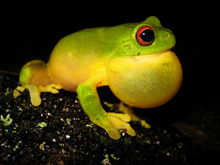 Frogs are important in medical research that benefits humans

Frogs produce a wide array of skin secretions, many of which have significant potential to improve human health through their use as pharmaceuticals. Approximately 10% of Nobel Prizes in Physiology and Medicine have resulted from investigations that used frogs. When a frog species disappears, so does any promise it holds for improving human health.

A group of Russian researchers found over 76 different antimicrobial peptides on the skin of the European Common Brown Frog (Rana temporaria). “These peptides could be potentially useful for the prevention of both pathogenic and antibiotic resistant bacterial strains” the scientists concluded.

The Northern Gastric Brooding Frog (Rheobatrachus vitellinus) lived exclusively in the Eungella Range in Queensland, Australia. These amazing frogs could actually shut down their gastric juices while rearing their young inside their stomachs! They therefore held great promise for advances in human medicine, as research on these frogs may have resulted in a cure for peptic ulcers, which affect 25 million people in the United States alone. Unfortunately, the gastric-brooding frogs vanished within a few years of being discovered by scientists. The health of humans and frogs is clearly intertwined.

“The present trend of elitism towards all other life on the planet is dangerous and extremely short-sighted. We must learn to co-exist, if not for compassionate reasons, then for practical ones of a healthy survival.” — SAVE THE FROGS! Member Choti Singh 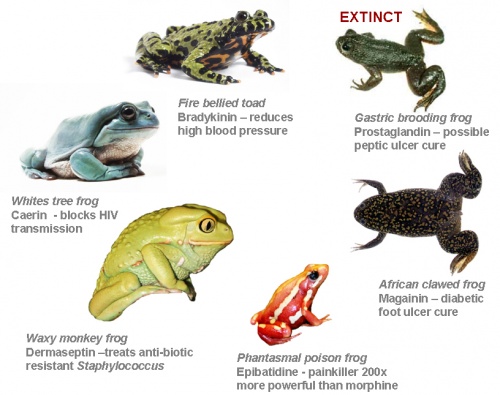 Frogs are cool. That’s why you’re on this website, right? Do we really need any other reason to save the frogs? Check out our Cool Frog Facts page.

“Frogs are really cool, I like them & I don’t want them to die.”
–Eric from El Paso, TX

“We have frogs now living under our porch and are really happy. Imagine a world with no frogs! Awful.”
–Jennifer from La Grange, KY

“The song of frogs singing, chirping and grunting is one of the sweetest sounds in nature.”
— SAVE THE FROGS! Member Rhea Worrell

“I want a world where my children can grow up mesmerized by these amazing creatures as I did as a kid.”
— Dan Krust Bissett

“Frogs are cool and they are a good example of biodiversity and everything worth saving in this planet. Thanks!”
–Asko Kauppi, Helsinki, Finland

“I always thought that frogs were cool,
no matter what anyone said.
It now turns out, they’re useful, too,
but most of them are dead.
Everyone thought they were gross,
and slimy and sticky like slugs.
Now who will come to their aide,
when they’re besieged with bugs?”
—Frog Poetry by Emily Mann

“I love frogs and they are worth saving!”
— Sofia Vrajitoru, Age 9

Frogs are an integral part of our existence on this planet and have every bit as much right to exist as do we. Moreover, if we allow one-third of the world’s amphibians to disappear, we set a bad precedent: perhaps future generations will use our irresponsible actions to justify allowing another third of amphibians or a third of the birds or reptiles to disappear. We caused the problem, so it’s our responsibilityand moral duty to make the necessary sacrifices and changes to SAVE THE FROGS!

Please help SAVE THE FROGS! by donating, becoming a member, spreading the word, and/or volunteering for us.

“The big thing about extinction is, it’s forever.”
— Bob Wright; Friends of The River

“Respect mother earth and her giving ways,
Or trade away our children’s days”
— Neil Young

“Clean air and clean water cannot be replaced by money. The future of the planet is not negotiable. Save the frogs and you’ll save yourselves.”
— Former SAVE THE FROGS! Board Member Dr. Jean-Marc Hero 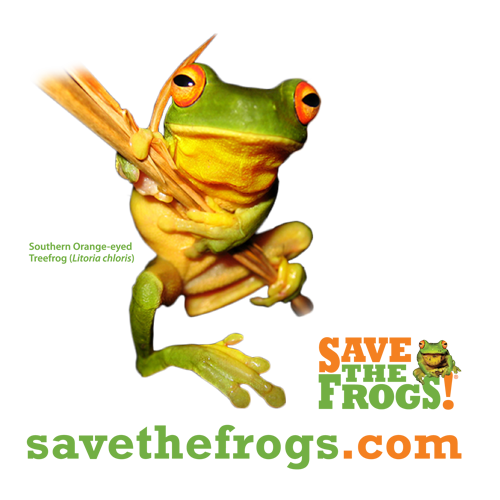 More Reasons To SAVE THE FROGS!

“You must have certain noble areas of the world left in as close-to-primal condition as possible. You must have quietness and a certain amount of solitude. You must be able to touch the living rock, drink the pure waters, scan the great vistas, sleep under the stars and awaken to the cool dawn wind. Such experiences are the heritage of all people”.
–Ansel Adams, 1961

“Many people ask ‘what does it matter if we lose a species?’. Only one species, Homo sapiens, has the capacity to eliminate other species on the planet. Unique among the animal world, we are accountable for our actions and future generations will hold us responsible. The question we should be asking ourselves is: how can we justify eliminating even a single species from this planet?”
–SAVE THE FROGS! Board Member Dr. Jean-Marc Hero; Professor of Vertebrate Ecology at Griffith University, Gold Coast Australia

“The day is coming when the rarest resource may not be oil or even water, but a place that does not smell of us.”
–Craig Childs

“If we don’t find the answers to these problems, then we are going to simply be a victim of this extinction event that we are at fault for creating.”
— Captain Paul Watson 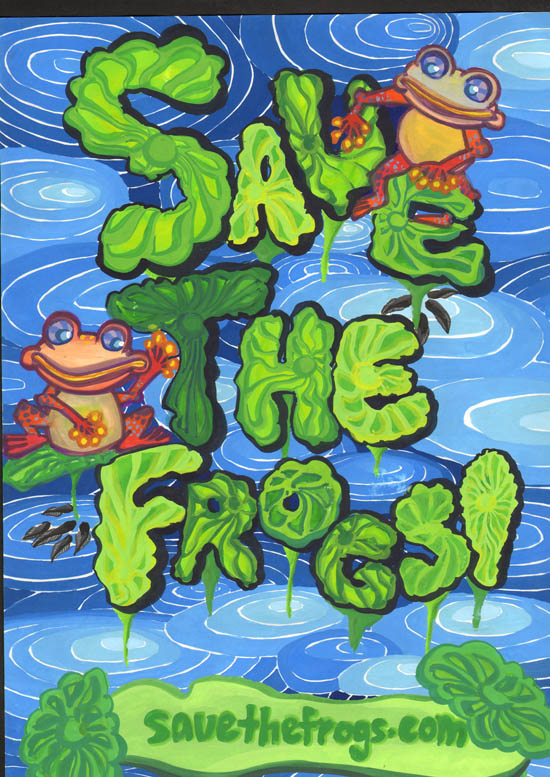 Why Frogs? – A note from our Founder

A personal note from SAVE THE FROGS! Founder Dr. Kerry Kriger:

One of the reasons I felt the need to start SAVE THE FROGS! is because people always asked me “why frogs?”. Actually, I still get the question all the time. If people don’t know frogs are cool, in trouble, and worth saving, then it will be difficult to save the frogs. This is why SAVE THE FROGS! always has a large focus on environmental education. When people ask me the question, there are two things they may be asking: (1) “What’s happening to the frogs and why should we care?”, for which I’ve created this Why Frogs page; and (2) “Why did you get interested in frogs?”. Here’s my answer to question #2, written in response to a young fan…

Q: “Dear Mr. Kriger, I love your website. I am positively the biggest frog lover in the world. I am eleven years old and I live in colorado. My name is Kathryn and my room is totally decorated in frog stuff. Well the reason why I am e-mailing you is because I wanted to ask you, how did your love for frogs start and why do you believe that frogs should be saved? Well it would be great if you could answer me back. Thanks. Kathryn B.”

A: I actually never had any fascination with frogs when I was growing up. While in the rainforests of Costa Rica’s Osa Peninsula when I was 20 though, I saw a treefrog calling from the side of a tree, and I was struck by how amazing and primitive it was. I felt pretty lucky to see something so incredible. A few years later I had to decide what to study for my Ph.D. research. Since I like hanging out at streams, I decided I should work with animals that live along streams. While deciding between various groups of stream-dwelling animals, I learnt that frogs were rapidly disappearing, so they became the obvious choice for my Ph.D. research. Spending four years hanging out with frogs in the rainforest definitely confirmed my belief that frogs are the coolest animals! It would be a terrible loss if we lost the sense of connection with nature we feel when we are around frogs. Since the frogs have yet to be saved, I don’t see much reason to switch the focus of my environmental efforts.

Frogs are cool and we need them! They need our help too, so let’s SAVE THE FROGS!

The Constitution of India, under Section 51A (G) states, “it shall be the duty of every citizen of India to protect and improve natural environment including forests, lakes, rivers and wildlife, and to have compassion for all living creatures”. Time for a 28th Amendment to the US Constitution!

“I found out about savethefrogs.com after my aunts made a donation in my honor for my birthday! I have created a habitat, welcoming frogs to our small back yard pond. I’ve watched many tadpoles grow, and proudly watched them hop off to return the next year! The beautiful songs they sing are my reward for helping them thrive in their home-made habitat.”
— Gina Scott

Thank you for caring about frogs! We appreciate your financial support, which makes our frog saving efforts possible.