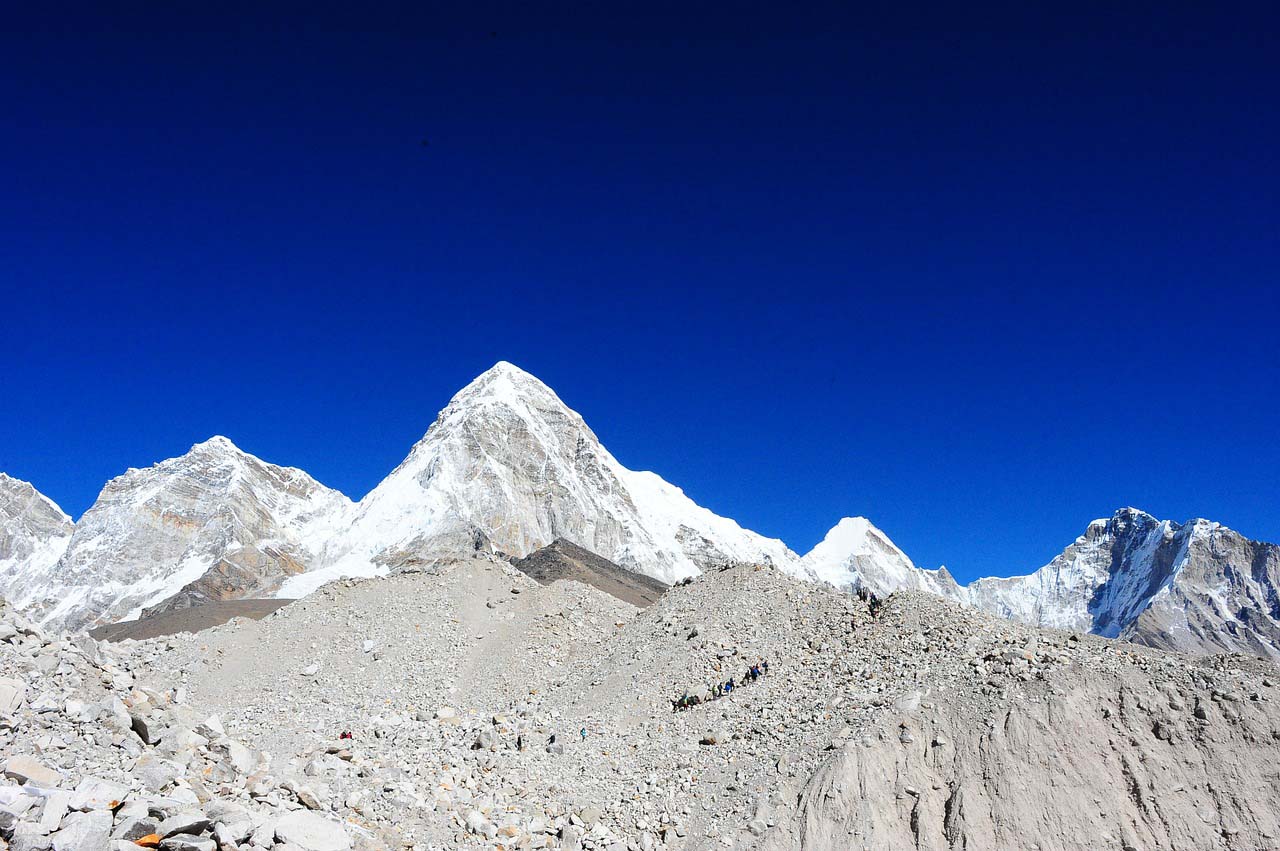 All around the world, SAVE THE FROGS! Members are helping with amphibian conservation efforts. For Manoj Pokharel, based in Nepal, frogs are “an irreplaceable part of nature” and it is their uniqueness that he finds so fascinating. What prompted him to become actively involved in conservation was the realization that despite their importance to the ecosystem, frogs and other amphibians are the most threatened group of organisms on the planet. 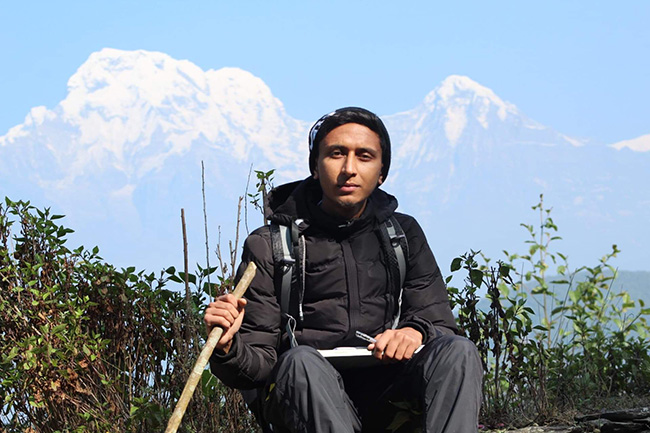 SAVE THE FROGS! Member Manoj Pokharel in the Himalayas

“I developed a heightened degree of interest in frogs,” explains Manoj. “I wanted to help them by protecting and conserving their remaining populations in any way I could.” Due to their lifecycle in both water and land, frogs interconnect both ecosystems, which means that they serve as a useful ecological indicator. 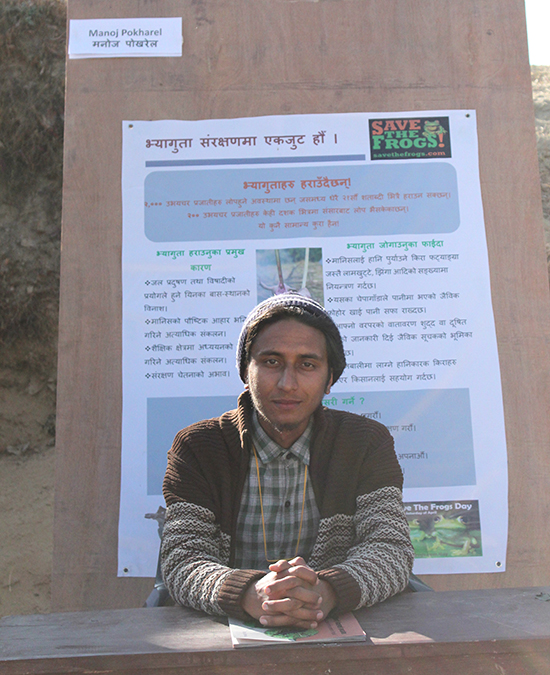 Manoj has been rapidly expanding his knowledge of local amphibians. “In my part of the world, 56 species of amphibians have been reported, comprising two species of salamander, one species of caecilian, and 53 species of frogs and toads. Among these, eight species of frogs are endemic to the country.” One of the interesting facts he relates is that in Nepal, frogs are known to have a surprisingly wide altitudinal variation: from 100m all the way to over 4,000m above sea level. 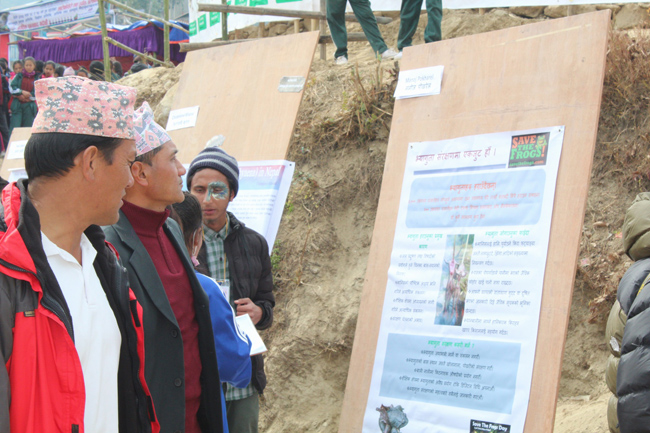 Manoj educating the public about amphibians at the Nepal Owl Festival, February 2019

With his growing interest in frogs, Manoj began searching for a platform that would enable him to become more actively involved in conservation and this was how he discovered SAVE THE FROGS!. He found about the organization from the SAVE THE FROGS! Facebook group, where an active wildlife conservationist and researcher from Nepal (Mr. Raju Acharya) had shared information about SAVE THE FROGS! Scholarships. Manoj applied for and was awarded a scholarship in December 2018. The scholarship covers his SAVE THE FROGS! Membership and provides him access to an array of amphibian conservation resources and opportunities. 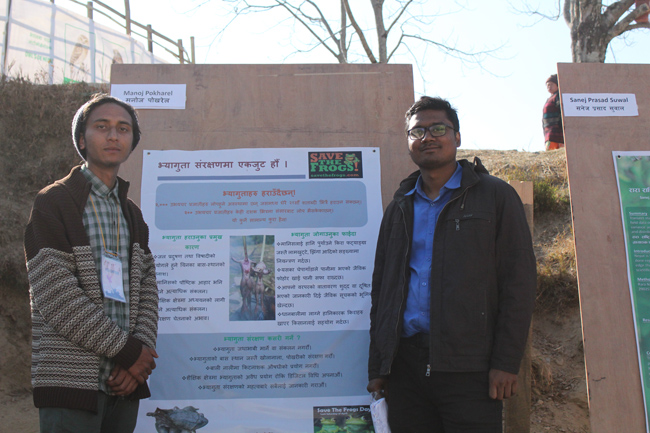 In February 2019, Manoj ran an informational table at the Nepal Owl Festival (conducted by Friends of Nature Nepal), to educate the local people of Jalapa and nearby villages of Khotang district about amphibian conservation. “I distributed some booklets and posters that were made available to me by SAVE THE FROGS! Volunteer Biraj Shrestha and they were quite helpful. I also got a chance to meet Akib Hasan of SAVE THE FROGS! Bangladesh. Thus, the overall event was successful as many people visited and showed curiosity towards amphibians and their conservation.” 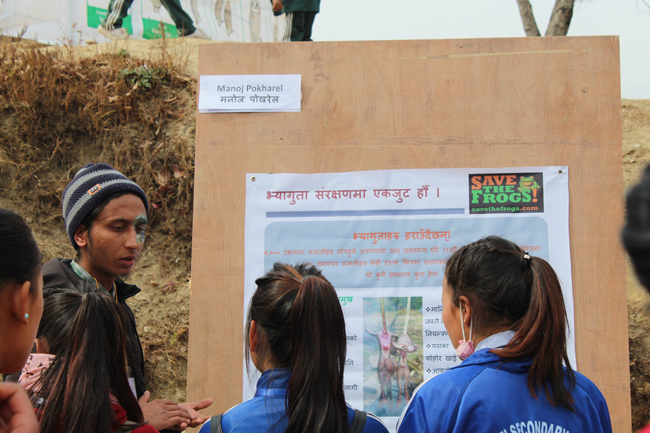 Like many other supporters, Manoj is very interested in organizing an event for Save The Frogs Day, which takes place annually on the last Saturday of April. At the moment, he is working on a plan to run a small community outreach program in a village outside of Kathmandu. 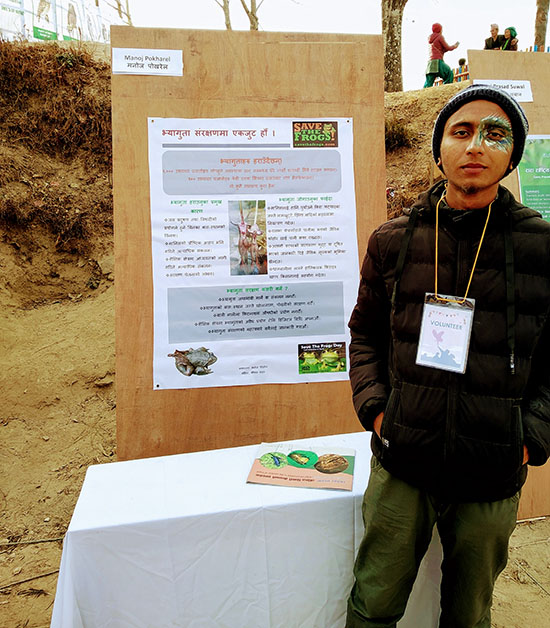 “I had previously conducted a small-scale survey on ethnozoology in a village called Okhreni,” he relates. “Through this I came to know a significant number of people living there who are still involved in the hunting of frogs (locally known as “Paha”) for food and medicinal purposes.” Manoj hopes that he can visit the village on Save The Frogs Day with some flyers, banners, and booklets and conduct an awareness program, which would involve going house to house and distributing flyers along with information about frog conservation. 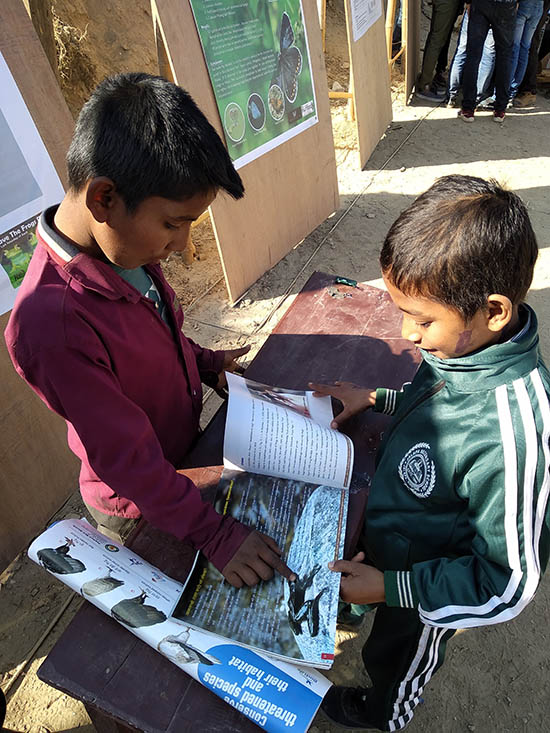 Students reading through the Nepal Amphibian Conservation Book, available in the SAVE THE FROGS! Membership Site.

Manoj believes there is more that can be done in Nepal to improve amphibian conservation. “Here, many people still live in rural areas with very limited connections to the outside world,” he says. “The most effective way to raise awareness about SAVE THE FROGS! and its work is to reach those communities directly and conduct conservation programs”. Regarding the future, he thinks that it is important to involve the younger generation, especially school children. “I think they will be particularly interested in what we are trying to communicate,” he tells us. “If we can visit schools and colleges located in remote parts of country and teach the students about frogs and the need for conservation, that will be an effective way to transfer the information to the community and challenge some of their negative beliefs regarding frogs.”

We wish Manoj lots of luck with his projects and thank him for helping to SAVE NEPAL’S FROGS! 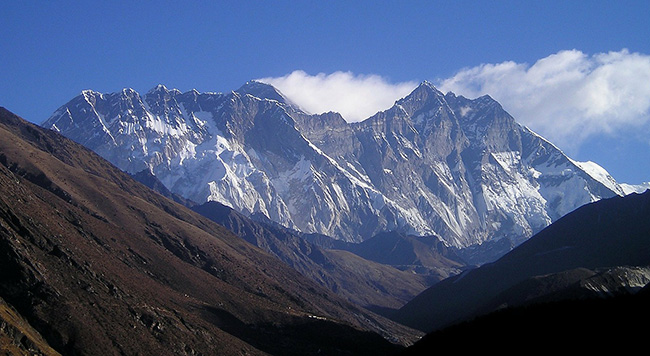